Have got any interesting solutions and ideas for problems with terminal servers? Looking for any solution?
Post Reply
6 posts • Page 1 of 1

I am new to WTware and really appreciate it but ran into a strange error. I set up a Pi with the trial version with no problems whatsoever. I then got licenses and changed it to a licensed one. Again, no problem.
However, when a co-worker set up a 2nd one with the same process that I outlined for him, when it boots up it gives a message saying "Received different responses from DHCP servers 10.11.12.13 and 1.2.3.4. It's Incorrect. Should be either one DHCP server, either configurations of multiple servers should synchronized" (Direct quote with the exception of the IP addresses)
The IP addresses above are fake ones replacing the actual ones. The point is the 1st one is the actual DHCP server and the 2nd is his workstation's IP address. I have no idea why it is giving that. Thinking he might have set up his wtware configurator slightly differently, I wiped the SD card and did it from my PC and the same thing happened. So, even though I configured it from my PC, say from IP address 1.2.3.16, I get the same error with his computer's IP address still showing up in the DHCP error, even though the card was wiped and done over (I tried both a quick format and a slow, full wipe).
In the WTware configuration file there is an entry for the terminal server we want to connect to but nothing about a DHCP server. We also have it set up to store the configuration file locally on an SD card, as opposed to booting up from the network.
I am going to get more PIs and see if I can reproduce this error but why would this be happening and how can I correct it? Is there some sort of BIOS file on the Pi where this DHCP info is stored? Is there a way for me to indicate in the WTware configuration file which DHCP server to use?
Top

bmgfan wrote: ↑
Fri Oct 15, 2021 4:39 pm
Thinking he might have set up his wtware configurator slightly differently, 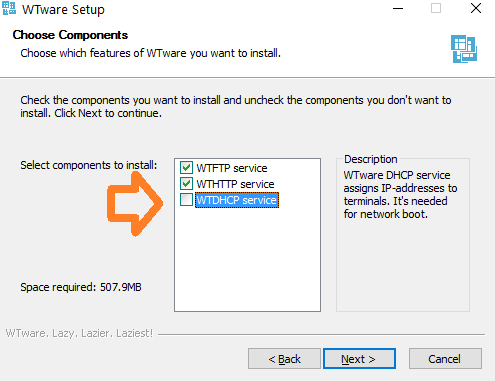 You can configure static IP, i.e. do not use DHCP. No way to choose preferred DHCP. Uninstall second one.
Top

I wiped the SD card and ran the Pi image creation from my PC which has none of the network boot components installed ie no WTFTP, WTHTTP or WTDHCP and yet my new image still gets that double DHCP error with one IP address being the real DHCP server and the other IP address being my friend's IP address from his PC. If the SD card was wiped with a full, slow wipe, how does it still have this other IP address? Is there the equivalent of a BIOS on the PI ?
I did the same exact image creation from my PC , with my WTware installation and that Pi doesn't have that issue but when I wiped his SD and ran the install from my PC, the same thing happens to me. : (
Top

Thanks for the response. I did see that log page but since I have more than one Pi created in WTware, how do I tell which MAC address is the right one?
Is there anywhere in the WTware client boot menu that I can find it? I know that if it was running Linux as a desktop OS I could run ifconfig but in this case, where it is only an RDP thin client, how do I get that information? Is there a command I can run from the terminal server command prompt to get the connected client's MAC and IP address information (since a regular ipconfig command will give the server's information and not the connected client's).
As an aside, the Pi client stopped giving that dual DHCP server error message. I don't know if it's because the DHCP lease ran out and the 2nd time it asked for an IP address things went smoothly or what the reason is but now it boots up to the terminal server login screen fine. I'm going to try it in a different location today and see if it's still ok from there.
Top

Pi ran fine from the other location. If I can reproduce it on another unit, I will post it here but for now, everything is ok again.
Top
Post Reply
6 posts • Page 1 of 1

Return to “Tips and tricks”